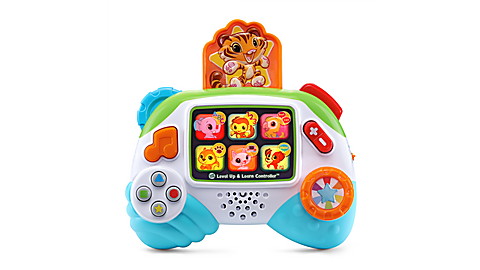 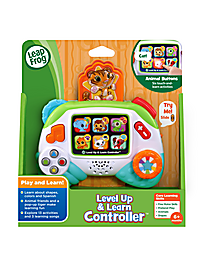 Get your game on with the Level Up & Learn Controller™! Kids love to imitate the adults around them, and this toy game controller lets them work their little fingers while learning as they play. Use the four-direction joystick to move an LED light up, down, left and right to help develop fine motor skills. Listen as animals say their names and make their animal sounds! Press the six animal buttons to hear their sounds and learn about ABCs, counting, numbers, opposites, rhyming and Spanish. Surprise! There's also a Tiger that pops up, plays peek-a-boo and unlocks bonus games. Game on!

Move the joystick
Choose an animal and hear their names and animal sounds by moving the joystick up, down, right and left.

“The Level Up & Learn Controller™ offers infants a fun and playful way to explore pretend play and exercise their developing fine motor skills. The variety of buttons and switches encourages young infants to press and turn with their fingers while fostering hand-eye coordination and early learning concepts including shapes, colors and animals." - Clement Chau, Ph.D., LeapFrog Learning Expert