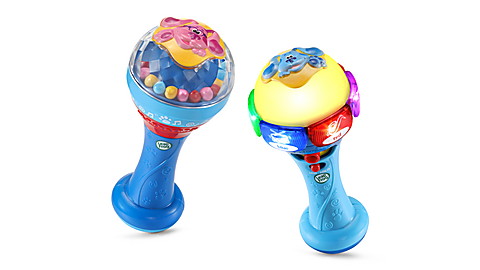 Ages 2-5 yrs.
Join Blue’s band with Josh and Magenta. Then pick up these maracas and shake to explore colors, numbers and instruments.
See what's included 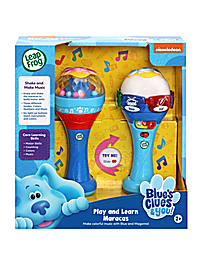 Join Blue’s band and get ready to shake, shake, shake the Blue’s Clues & You!™ Play & Learn Maracas. One maraca features a light-up dome that changes colors and plays maraca sound effects and the other includes colorful shaker beads. This musical toy featuring Blue and Magenta has three play modes that feature songs and learning phrases from Josh. In Colors Mode, shake to see the colors change and hear color names. Shake the maracas to hear Josh count from 1 to 10 in Counting Mode. In Music Mode, shake to hear different instrument sounds. Press the light-up buttons to hear color names and the sounds of six instruments featured in the show. Shake up some creativity by switching between Jam and Solo Modes to play with musical accompaniment or add and remove instrument sounds to compose unique music.

Make music
Play along to the music in Jam Mode or compose original music by adding or removing different instrument sounds.

Blue's Clues & You!™ Clue Into Words