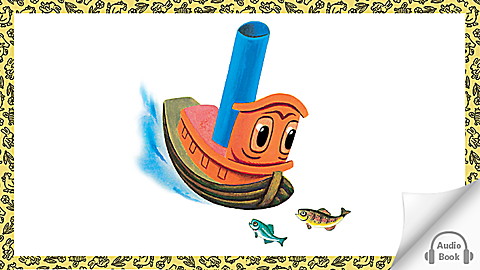 Scuffy the Tugboat and his Adventures Down the River

Scuffy, the shiny red toy tugboat, wishes for “bigger things” than sailing the calm bathtub waters. One day, Scuffy’s owner, a nice boy named Nicky, takes Scuffy to sail in a small brook. The current carries Scuffy down the brook and into a stream, where he makes happy toots and sees his first water lilies and cows. Soon the stream becomes a small river and then a big river, and Scuffy feels overwhelmed.

Night falls, crickets chirp, owls hoot and Scuffy the toy tugboat feels frightened. He toots to keep his courage up as he sails into a busy port during a thunderstorm. When the water rises, no one can hear Scuffy’s cries for help. Just then, he’s rescued and returned to the bathtub where he’s now content to remain. Scuffy discovers that he can be brave in the dark, sail in a big river and won’t let a storm sink him, but he’s “a little toy tugboat and THIS is the place for me!”

See the Privacy Policy to learn about personal information we collect on this site.
© 2001-2021 LeapFrog Enterprises, Inc. All rights reserved.