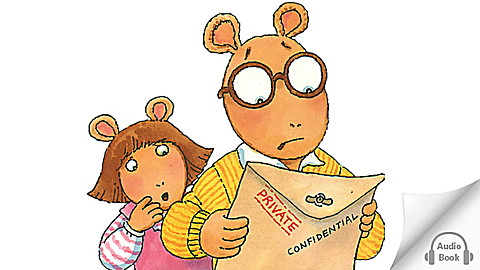 Ages 4-8 yrs.
Arthur gets enveloped in worries about a mysterious letter.

When Principal Haney asks Arthur to deliver a mystery envelope to his mom, Arthur and his pals assume it means he’s in trouble. Francine and Buster play tug-of-war with the envelope while Brain suggests ditching it in a storm drain so it ends up in China!

The tension builds. What’s in the mystery envelope? Arthur’s so nervous, he can’t concentrate on the karaoke kittens on TV. He even has nightmares about the envelope growing so big it breaks through the roof of his house. Whatever’s in the envelope…he’s sure it can’t be good. But can it be worse than this?

Narrated by Mark Linn-Baker, Arthur and his friends learn to deal with uncertainty before jumping to conclusions.

See the Privacy Policy to learn about personal information we collect on this site.
© 2001-2021 LeapFrog Enterprises, Inc. All rights reserved.