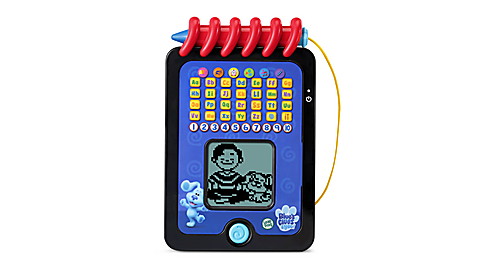 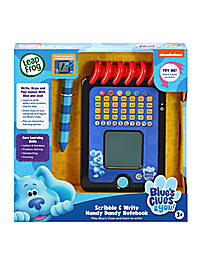 Play with Blue and Josh using your own Handy Dandy Notebook with the Blue’s Clues & You!™ Scribble & Write Handy Dandy Notebook. Practice writing numbers, uppercase letters and lowercase letters using the blue-striped stylus by following along on the LED touchscreen. The touchscreen shows stroke order step-by-step and provides immediate feedback as little learners practice writing. Play six learning modes with Blue and Josh to explore phonics, logic, numbers, counting, shapes, music and creativity. Josh’s voice guides kids through play while Blue offers her encouragement. Draw three clues on the Handy Dandy Notebook screen, then think, think, think to help Josh figure out Blue’s Clues. Get creative in Free Draw mode or jam along with Blue and Josh by adding percussion, guitar and piano sounds to make your own music.

Learn to write
Follow the step-by-step instructions to learn how to write numbers, uppercase letters and lowercase letters.

Explore numbers
Count the sound of Tickety's bells and calming breaths with Josh, and help Blue finish her number banner.

Free draw
Exercise creativity and draw anything you like on a blank canvas.

Make music
Jam along with Blue and Josh by adding percussion, guitar and piano sounds

"The Blue's Clues & You!™ Scribble & Write Handy Dandy Notebook invites preschoolers to join Blue and Josh on a variety of play-along learning activities—from exploring letters and numbers to practicing handwriting with stroke-by-stroke instructions. Additional activities like free draw and the Blue's Clues game foster creativity and logic skills. Blue and Josh provide encouraging guidance in every activity so young children can learn at their own pace." Clement Chau, Ph.D., LeapFrog Learning Expert

Blue's Clues & You!™ Clue Into Words