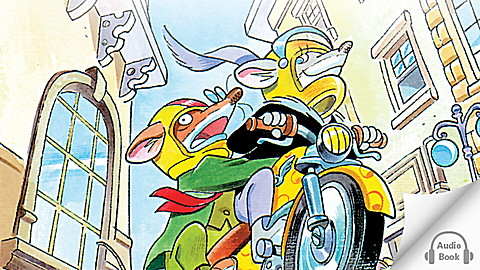 Meet Geronimo Stilton, intrepid newspaper reporter for The Rodent’s Gazette on Mouse Island. When his thrifty grandfather steps in to cut costs at the newspaper, Geronimo heads to Egypt in pursuit of a professor who has discovered an alternative energy source involving camel dung.

Listen in as Geronimo takes to the skies on Dirt Cheap Airlines and crosses the desert on a “crabby old camel.” Though the plane nearly crashes and he gets trapped in an ancient pyramid, Geronimo still has a whisker-licking adventure. Follow along as he finds—among mummies and hieroglyphics—the secret of the Seven Wonders of the Ancient Mouse World!

Geronimo Stilton is a best-selling children’s series about Geronimo Stilton, talking mouse, journalist and editor for the fictional newspaper The Rodent’s Gazette. Curse of the Cheese Pyramid is the second audio book in the series.