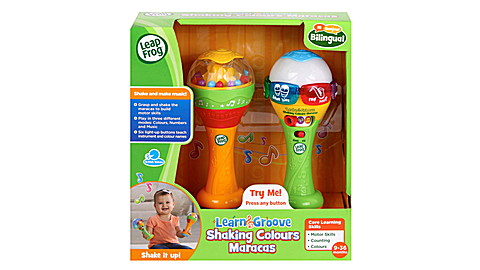 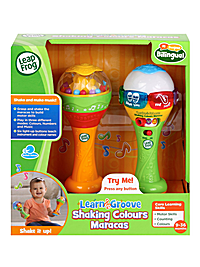 Shake up learning with the Learn & Groove® Shaking Colours Maracas™! One maraca includes colourful shaker beads and the other features a light-up dome that changes colours and plays maraca sound effects. This musical toy includes three play modes that introduce colours, numbers and music. Little ones can add rattling sounds to the songs that play, count from 1-10 with every shake and press the six light-up buttons to hear colour and instrument names. Switching between English and French mode lets kids explore all of the content in both languages. Intended for ages 6+ months. Requires 1 AA battery. Battery included for demo purposes only, new battery recommended for regular use.

Light-up maraca
Electronic maraca has a light-up dome that flashes in a variety of colours and plays maraca sound effects.

Maraca rattle
Two are better than one! Shake the non-electronic maraca to rattle the beads inside.

Bilingual instrument
Switch between English and French to explore all of the content in both languages.